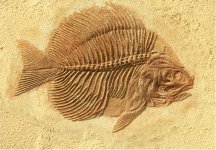 Fossil record does not show gradualism.

Beliefs should be based on evidence.

Fossils are the remains (or impressions) of previously living things, preserved in rock.
Fossils are generally found in sedimentary rocks.
If evolution were true, there should be vast numbers of intermediate types of fossils - of ALL species EVERYWHERE.
There is no evidence of transitional fossils in the rocks.
Even evolutionists admit this.

Richard Dawkins, The Blind Watchmaker: "And we find many of them (major invertebrate groups) already in an advanced state of evolution, the very first time they appear. It is as though they were just planted there, without any evolutionary history."

Q1: How long does it take to produce a fossil? 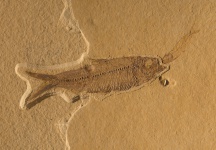 Textbooks claim that fossils form slowly over millions of years.
The evidence is the exact opposite.
Jellyfish fossils exist. A dead jellyfish will melt away within a few days after death. Therefore the fossilization process must happen very quickly by rapid burial in sediment.
For soft tissue features to be preserved in the rock, the sediment must have hardened quickly before the living thing decayed.
Look closely at the second fish fossil. It shows the larger fish, eating a smaller fish. This could not happen slowly over millions of years.

Given the right ingredients and conditions, rocks can form within an hour - e.g. concrete. Just add water.
Three quarters of the earth's continental surface, is made of sedimentary rock - i.e. formed in water.

Evolutionsts use fossils to "date" rocks, and rocks to "date" fossils - circular logic.


Solution: Fossils are formed by rapid burial in sediment - not slowly over millions of years.

Back to home page